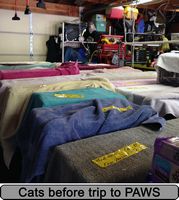 On June 30th Feral Fixers sent the last group for the month of June into PAWS. Of 27 cats, 24 were ferals and 3 were friendlies. We could have sent more friendlies but PAWS was already overbooked – they did over 100 surgeries that day once again! There were 7 males and 20 females. One female feral had a hernia repair – good to know that she won’t have that looming in her future now. We couldn’t make room for one friendly kitten, so we sent him to Glen Ellyn because we had a shelter willing to take him if he was neutered first, and then able to join his siblings who were already there. With these 28, our total for June is 94, total for year is 370 and since we began in 2007 we have neutered 8, 805. 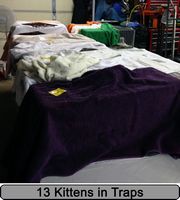 Included are some pictures from our trip to PAWS. Along with trapping the 24 ferals, I think we also trapped another TWENTY kittens who were too young to go into PAWS. Until they have the room to go into a crate, they stay in the traps. Being alone in the traps is hard, but it furthers the taming process. They are dependent on us for care and having no one else, we become the best thing. Its not easy, putting them thru this, but it is the fastest way to a happy kitten. There’s a picture of 13, waiting for the next step. There’s a picture of one feral that made a cave from her newspapers – we’ve had a lot of shredders this year!

Debbie & Charli did transport in the AM and Debbie & Dedra picked the cats up and brought them back at the end of the day. 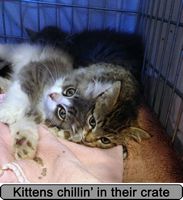 During the course of the day, more kittens were caught, plus the original 13, plus the 27 that came back from PAWS. This requires a lot of resources. When they come back, they get a meal – one meal for this many on this day was thirteen 13oz cans. We give them just canned for this meal as their throats might not be up to dry food. The following day, the amount of canned is reduced but made up for by adding a half cup of dry food each. The cans of food are mixed with water in order to ensure their water intake is kept up. After using many different vessels, we now take Styrofoam hamburger clam shells, cut them in half and each is a dish capable of handling the soupy food without breaking down.

Drowning Babies in the River 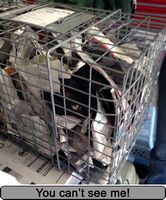 Animal Sheltering is a magazine produced by the Humane Society of the United States, their recent e-magazine included an article on finding a new source of inspiration to continue in Rescue. https://www.animalsheltering.org/blog/finding-new-source-inspiration Many people have heard the story of the starfish = if I can save just this one, I’ve made a difference for at least this one is how it goes. There’s another story that is new to me - the Drowning Babies in the River tale. The story goes like this:

One summer in the village, the people in the town gathered for a picnic. As they leisurely shared food and conversation, someone noticed a baby in the river, struggling and crying. The baby was going to drown! Someone rushed to save the baby. Then, they noticed another screaming baby in the river, and they pulled that baby out. Soon, they saw more babies and were pulling them out as fast as they could. They were exhausted, and the whole town had to work together to keep more babies from drowning. So when people saw two of the townspeople starting to run up the river bank, they shouted for them to stop. “Where are you going?" they yelled. "We need you here to help us save these babies!”

We are going to stop whoever is throwing them in! 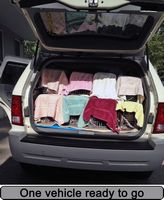 TNR is doing its best to march up that river and stop the babies being thrown in. This story really struck me. When you read the rest of the article, yes, there are other things you can do, but the only way for those other programs to work is to reduce the number of animals that they have to support. Our “townspeople” are exhausted and the resources to care for the cats already here will never be enough. We have got to prevent their arrival.

A wonderful time was had by all at Feral Fixers’ first annual Kitten Shower! We’ve heard nothing but compliments from attendees about the food, the silent auction, door prizes, gift bags, the whole thing! 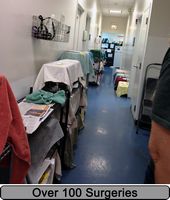 We are extremely grateful to everyone who participated, donated and had a good time! We had a lot of Kitten Shower gifts that were immediately useful - the Kitten Avalanche began in earnest just days after! Our Boutique and the Recycled2New booths were busy during the whole event. So many people generously donated to our June is for Kittens Giving Grid, we will be doing that fundraiser in the future, too.

Thank you for making it worthwhile to host this event! Our donors do so much for us, we enjoy giving them a good time in thanks!

We have a lot of events on our roster coming up this Summer and Fall.

7/9 Our first Pet Supplies Plus Adoption event – the Ogden Ave./Naperville store – hope to see you there!

8/27 is the Shred4Rescues in Westmont – Citadel Information Management donates the proceeds from this event to several animal rescues in the area – save up your documents and dispose of them safely!

10/1 Two Bostons of Naperville is holding an Adoptathon! Always a good time!

10/16 National Feral Cat Day – stay tuned to learn more about our even on that day!

We can always use more smiling faces to represent Feral Fixers at these events! Please contact us at This email address is being protected from spambots. You need JavaScript enabled to view it. to sign up!