Feral Fixer president Tammy updates us on the trip to the PAWS-Chicago Spay/Neuter clinic last Thursday. 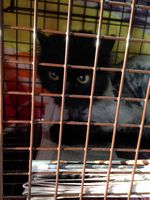 On Thursday, 4/14/16, Feral Fixers transported 21 cats to PAWS, Debbie & Charli did the AM delivery. THEN, someone called with a cat they had just trapped. We try never to have late arrivals but did not want to hold onto the cat for days. PAWS agreed to do the surgery if we had him there by 2PM - definitely the exception, only the third time ever we have asked to do so. Wonder of wonders, Jennifer was headed into the city, although she was headed to the North side, she was willing to take this cat and then cross town to her destination - Thank YOU, Jennifer! Spooner says thank you too, or will in a month or so! So Dedra and Debbie brought 22 cats back at the end of the day. Of those 9 were friendlies and 13 were ferals, 13 were males and 9 were females. Among them was Pearl, who was found to have an internal mass, which PAWS removed for us to take to our vet for biopsy, we are crossing our fingers it is benign. Her caretaker intends to bring her inside so perhaps this is in the "land of meant to be." This brings us to 22 this trip, 34 for April, 188 for the year and 8,623 since our start in 2007. 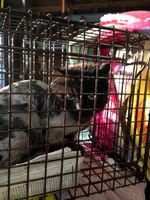 Another cat was trapped from the same area as Spooner, on Wednesday evening. We spotted the eartip, scanned her - she had been TNR'd in 2014. Sparrow had insane matts covering her body, she even had a poof of one in the middle of her forehead. She went to the vet today to have the matts dealt with, she required sedation. They called to let us know they were sending back a naked cat. We don't have before pictures, but wanted to share the after pics. She is a solid black cat, interesting to see the colors of the skin underneath - she has no disease, she's just very bald now! Perhaps when it grows in, she will be more smoke? We will be asking the caretakers - they have a business - to try and keep her inside as much as possible, but hopefully she is smart enough to figure that out herself! She should feel sooooo much better!

Thank you PAWS - and thank you to our transport volunteers Debbie, Charli, Jennifer, Dedra and Debbie (again)!

Postscript - And thank you to Debbie for taking the pictures of Sparrow!

(Click on the thumbnails of Sparrow to see full-size pictures)